Carissa and Matt in Dallas-Fort Worth received quite a few curveballs of their own along the way to building their family.

Three years ago, after a decade together and seven years of marriage, they decided they were ready to start a family. But their first surprise was discovering it wouldn’t be quite that easy to get pregnant. After a year and a half of trying with no luck, the couple decided to face their infertility and get answers. Carissa’s sister had trouble conceiving, she said, so she figured it was probably a female factor.

Testing, however, revealed that their difficulty getting pregnant was actually due primarily to a male factor: non-obstructive azoospermia. The couple quickly began treatment with intrauterine insemination (IUI) with donor sperm.

But after multiple failed donor IUIs, infertility took an emotional toll on Carissa and Matt. While looking for answers, they found RESOLVE: The National Infertility Association, and joined one of the organization’s free support groups.

As Carissa in particular became more involved with RESOLVE, she discovered a true passion for spreading awareness about infertility.

Ultimately, through RESOLVE the couple found not only emotional support, but the answers to their prayers.

To support RESOLVE, Carissa and Matt registered for the Dallas Walk of Hope, the local chapter’s annual major fundraising event. “I felt that RESOLVE had done so much for me, and I just wanted to give back,” Carissa said.

As part of the fundraiser, they entered a giveaway for a free cycle of effortless IVF®, hopeful but with tempered expectations. 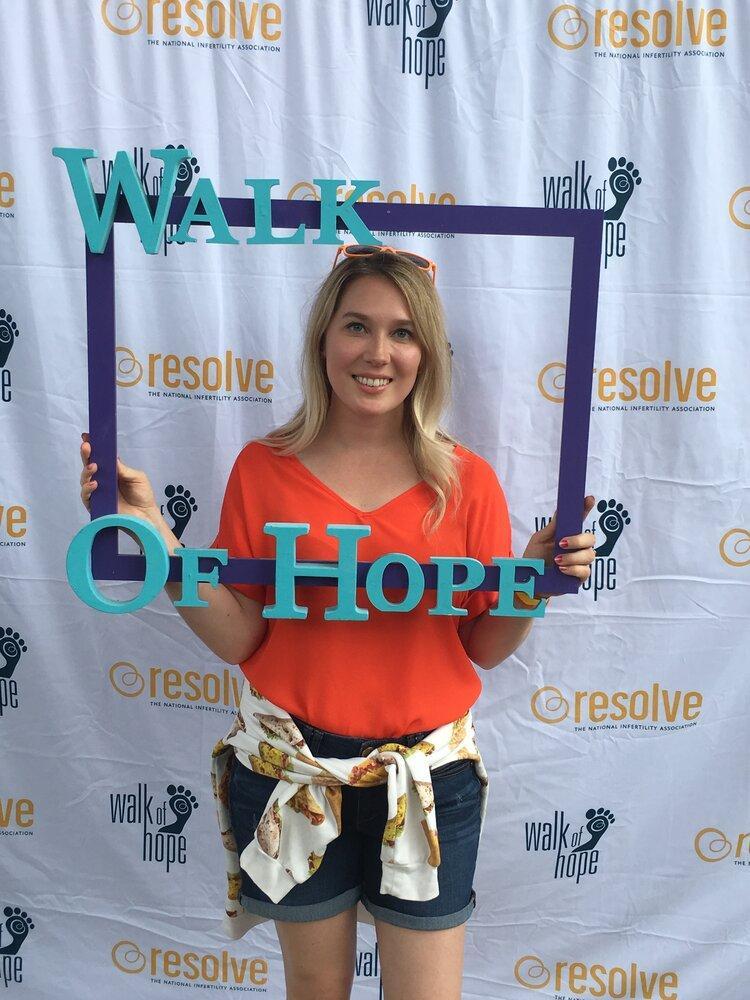 “I knew about the drawing and was already interested in IVF treatment with INVOCELL at that point. I’d researched it and thought, wow, this is neat. IUIs weren’t working for us, but it seemed like this could.”

Little did they know that this decision would forever alter their family.

“I was in so much shock when we won because I did not think that we would, by any means.” 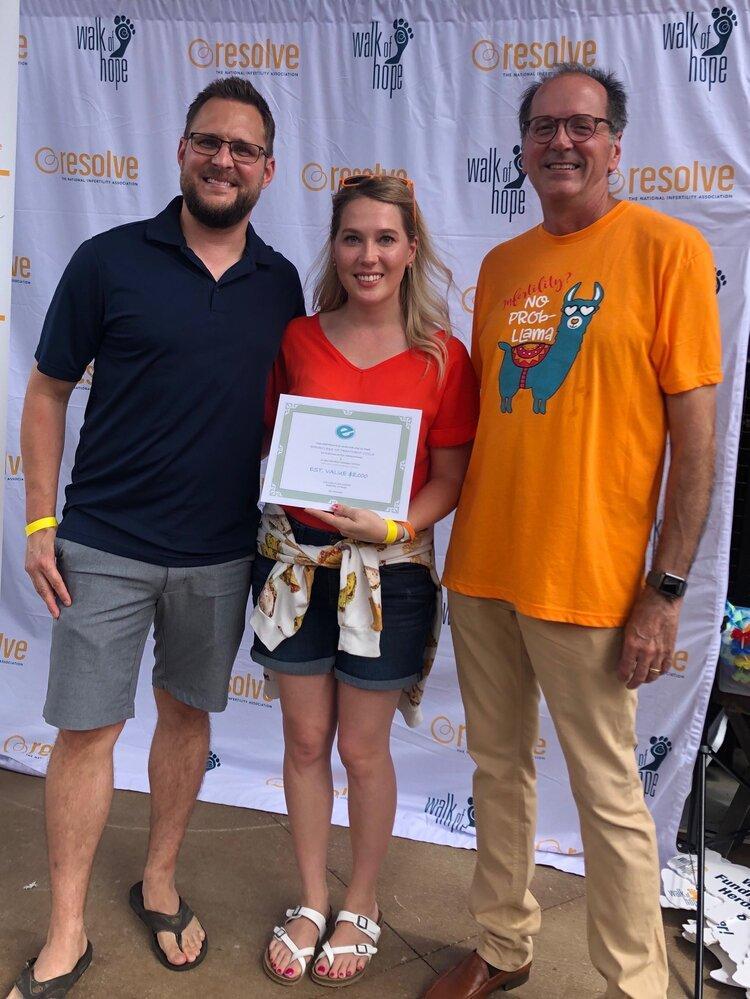 After they found out they won, Carissa remembered getting into the car with Matt to go home. He turned to Carissa and said, ‘Finally, we have something going our way.’

“That's what it felt like. It felt like finally, something good will come of all this,” recounts a beaming Carissa. “We’re so very grateful for it.”

Their effortless IVF® treatment began with a sonogram, followed by fertility injections to stimulate Carissa’s ovaries, and a second sonogram ten days later to check her progress.

“It's funny, but I barely even remember the office visits, probably because there were so few that I actually had to do,” said Carissa. “I don’t think I’ll ever forget the injections. That part was not fun, but you get to a point where it’s so worth it.”

Fortunately, the egg retrieval was a success, resulting in fourteen eggs. 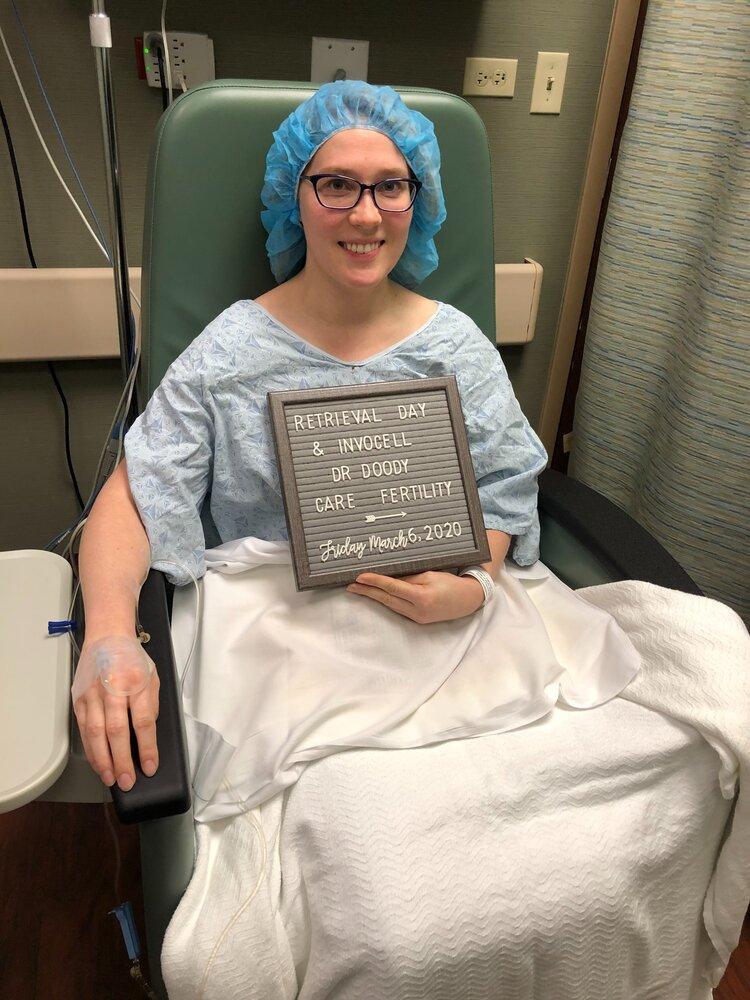 Those eggs were placed with her donor sperm into the INVOCELL device, about the size of a champagne cork, which Carissa carried comfortably inside for five days. “I expected to feel it,” she said, “but never did. It was never an issue.”

When they returned to remove the INVOCELL, they got their biggest surprise to date.

“I was thinking, if we get three healthy embryos, I'd be okay,” Carissa said. “And then they said we got eight. I was like, ‘What?!’ I was very, very shocked we got so many.”

The embryos were frozen and Carissa was started on estrogen and progesterone. Unlike with conventional IVF, she didn’t need to undergo multiple appointments for sonograms and monitoring, due to the streamlined approach of effortless IVF®.

About two weeks later, the couple returned for their frozen embryo transfer.

“Honestly, I don’t feel like any part of it was difficult,” Carissa said. “It wasn’t a long drawn-out process, and it was really easy to time it with my work schedule.”

To their relief, it worked. They were pregnant!

But when Carissa returned for her sonogram, she got the biggest shock of all.

As Dr. Kathy Doody passed the ultrasound over Carissa’s belly, she paused and did a double-take at the 3D sonogram on the monitor. 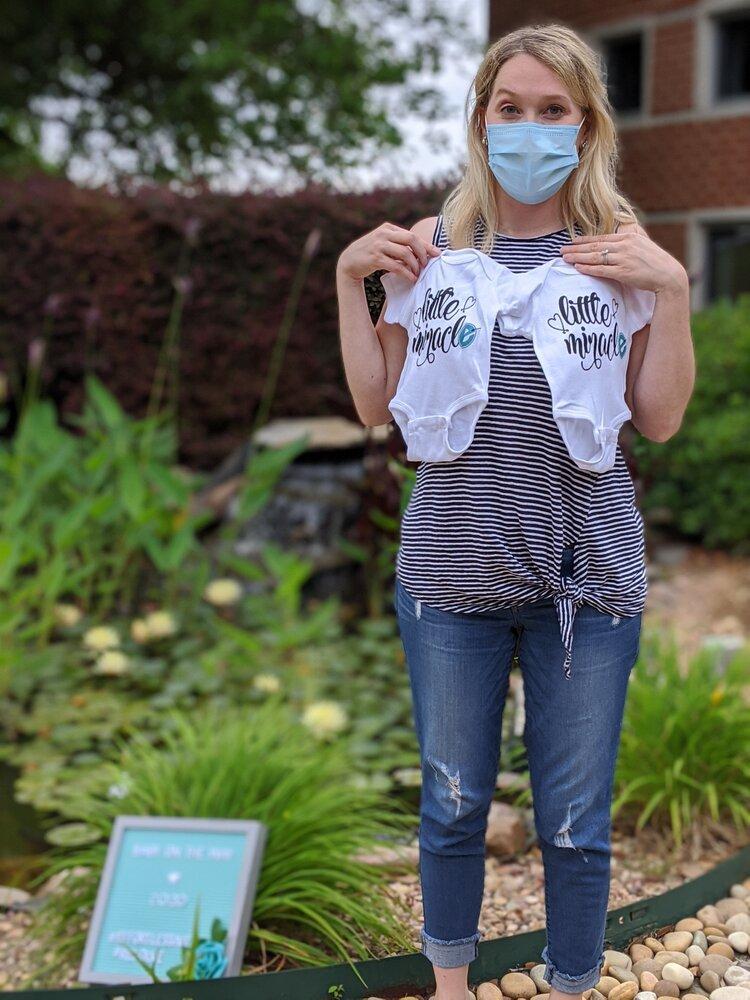 “You had to get me out of the room. I was in so much shock,” Carissa remembers. “Never in my wildest dreams would I ever, ever have thought that would happen.”

Though they transferred a single embryo, it had spontaneously split in the womb.

After struggling to conceive for years, Carissa and Matt were having identical twins.

Matt wasn’t there that day, though, neither in person nor on FaceTime. So immediately Carissa and Dr. Kathy began plotting how to break the news.

The mom-to-be rushed home from her appointment and got to work, setting out a cork letterboard and her effortless IVF® branded onesies, and assembled them with the sonogram printout. 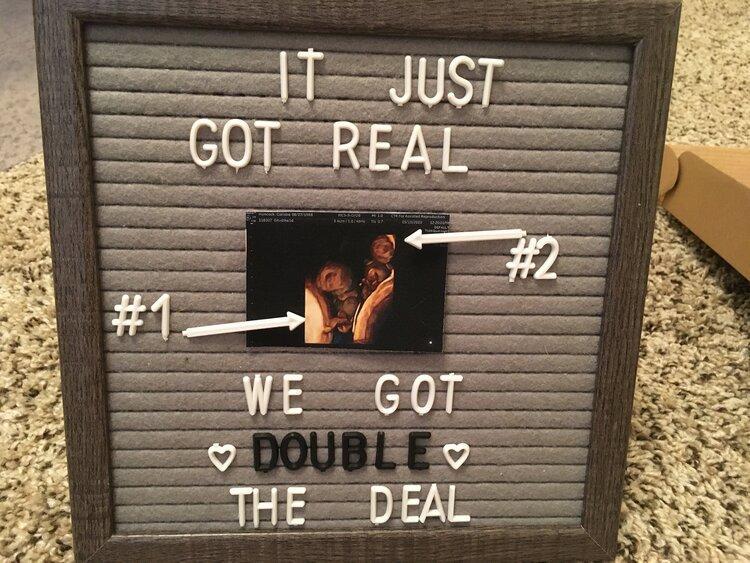 The board read, “It just got real. We got double the deal.”

When Matt got home, she sat him down on the sofa and pointed at her big reveal.

Matt was speechless. “He just kept staring at it. Finally he kept saying, “What? What?!” He was so excited too, and we both ended up just crying and hugging.

We couldn’t believe it,” she said. “It’s just such a great blessing.”

Carissa and Matt are now the proud parents of two beautiful baby girls, Brooklyn and Brielle, delivered in October at 32 weeks via cesarean section. “Throughout my pregnancy, one twin was receiving more nutrients than the other because they had to share a placenta! So, it was better to deliver early in order for them to grow individually,” Carissa explained.

Due to their early delivery, they spent time in the NICU and Special Care Nursery. “While it seemed scary, the nurses were absolutely amazing,” Carissa says. “Matt and I were able to learn so much during their 6 week stay from diapering, to bottle feeding, breastfeeding, to how to give them a bath. It really felt like ‘parent boot camp’ and helped prepare us to take them home.”

As if their journey to Brooklyn and Brielle weren’t eventful enough, however, Carissa and Matt experienced complications during the delivery.

“During my c-section, my uterus wouldn't clamp back down and they actually had to perform an emergency hysterectomy,” Carissa reveals.

“It was a very surreal experience in the sense that in the same hour, we were blessed with our two babies and learned we wouldn't be able to have any more,” she said. “It's an odd feeling knowing that this will have been my only pregnancy.” 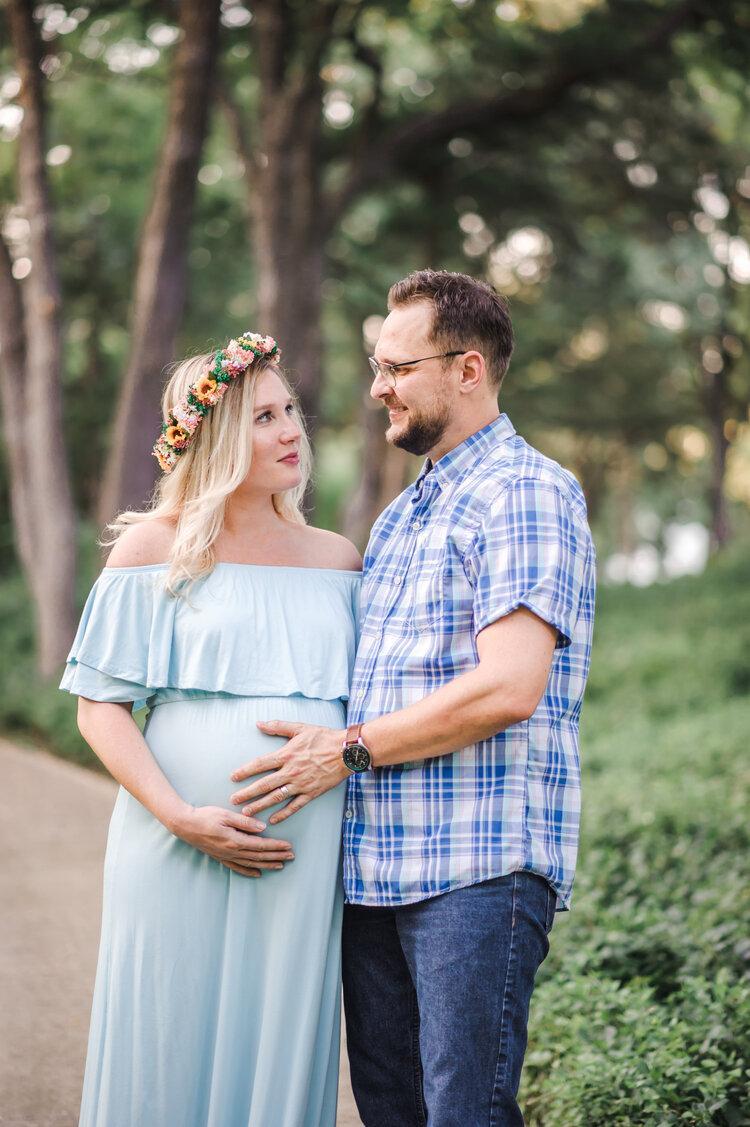 Still, Carissa and Matt feel lucky — both from the free effortless IVF® cycle they won and the beautiful twins they delivered.

“I think the team of doctors expected us to grieve over the fact that we wouldn't be able to have another pregnancy, but we already spent years grieving from our previous infertility diagnosis. I just don't think we need to anymore.”

“Having identical twins in general is already such a rare thing, we can't help but feel like we were chosen for this job,” Carissa mused. “We are so incredibly grateful and I know we will cherish every moment with our sweet babies. We feel like the luckiest people in the world.” With Matt’s help and the support of family nearby, Carissa healed from her delivery — and more than 45 days later, both twins have been released from the NICU.

Now, they’re settling into their new roles as parents and getting to know their babies.

“Matt is really loving fatherhood,” Carissa shared. “He is always checking to see if I need anything and loves cuddling with his girls. He even bought himself a ‘Girl Dad’ t-shirt, he is just so proud! We are beaming with joy over our little angels.” 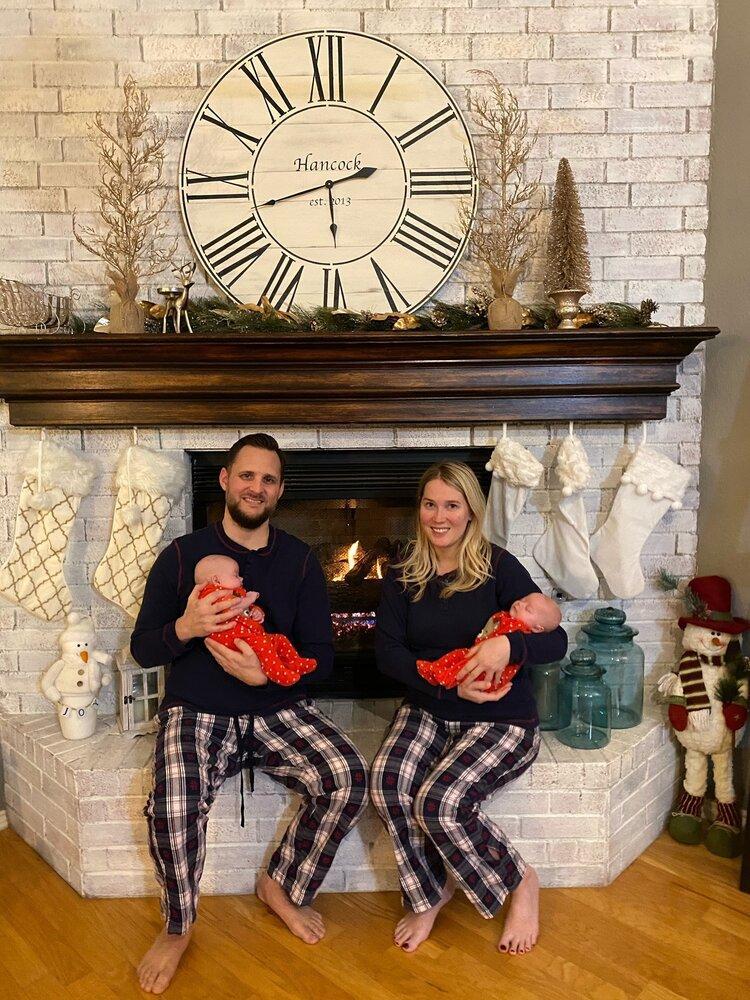 Meanwhile, the twins are expressing their personalities — but no surprises there.

“Brielle was a bit more shy in the womb, and she’s definitely proven to be the quieter twin.”

Brooklyn, on the other hand, was much more active and engaged in the womb, and now she’s “extremely active and wants to always be ‘in the know’ — she’s constantly looking around.”

Now that Carissa’s on the other side of her infertility journey, she has many words of wisdom to share with those just beginning — or in the messy middle.

“Infertility changes you as a person. It really does,” she says. “And in your social world, people have no idea what you're going through and say things that are just really inappropriate. It can be such a lonely journey.”

In advocating for infertility awareness through RESOLVE, Carissa found community. “So many people reached out to me saying, "Wow, I'm going through the same thing and I've been really frustrated and lonely about this, and I'm glad you spoke up.”

Carissa credits finding RESOLVE and joining a support group for her success.

“I think the most important thing you can do is find support. Because otherwise, it just feels like you’re drowning. If I didn’t have RESOLVE, honestly, I don’t know if I’d be on this side at this point. Support and resources are out there. Treatments are out there that are easy, and accessible, and affordable.”

Read Matt’s side of the story: “I focused on what I could control” — Matt’s journey with infertility

Ready to get started?