In celebration of LGBTQ+ Pride Month, we’re sharing the stories of same-sex couples who are successfully building their families with assisted reproductive technology. Happy Pride! 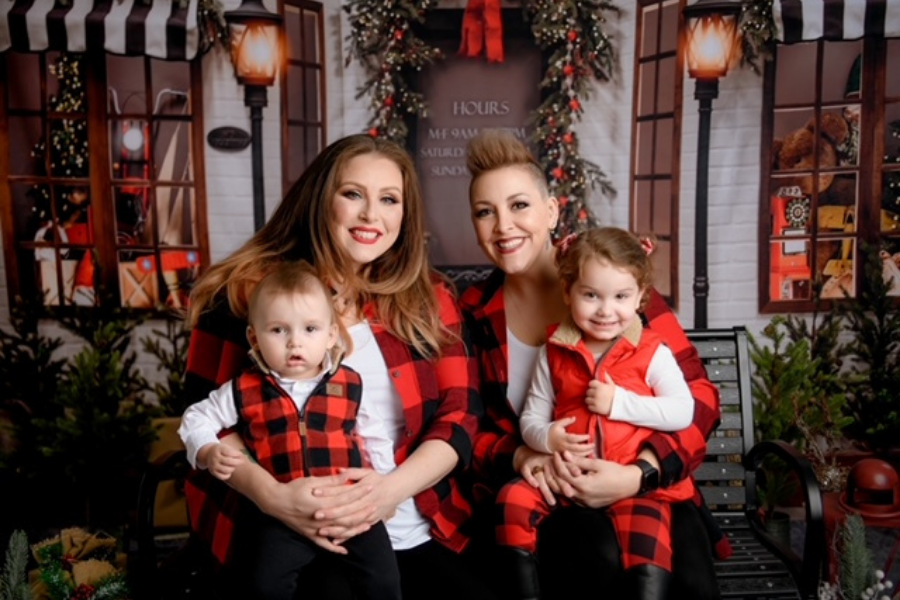 After six failed IUIs and a miscarriage, Natasha and Sirena finally found success on their fertility journey using IVF. With each using their own eggs and the same donor sperm, they’re building the family of their dreams. They gave birth to Domino in January 2018, and Finnigan followed 23 months later!

Here’s Natasha’s story of how they got here, and the advice they share with others:

Sirena and I met through a mutual friend, Danielle, in 2014. Danielle decided we needed to be together, and there was no talking her out of it! She pestered Sirena into asking me out and she proceeded to ask me on every date imaginable. How could I say no? We've been inseparable ever since.

After coming home from work one day, I was surprised with a scavenger hunt of all of our first and favorite places. It ended with Sirena proposing to me in front of friends and family. We got married in October 2015 and will be celebrating our sixth wedding anniversary this fall. 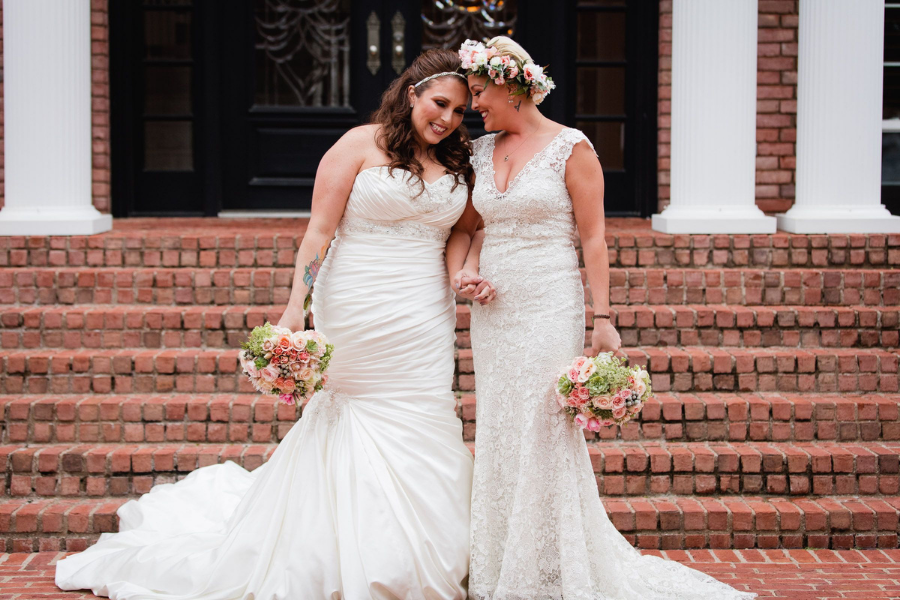 We had already discussed building a family, and knew we wanted to start the process pretty quickly after the wedding, especially as we were both in our mid-thirties. Sirena wanted a football team and I wanted one, so we settled on two.

We began our search for fertility clinics that would not only help us realize our dream but support us in the process.

It was important to us that we choose an LGBTQ+ friendly clinic, as we wanted allies to help us achieve our family dream. Cost was a big concern, but thankfully we were blessed with phenomenal infertility benefits with insurance and an extremely supportive family.

We chose Dr. Nackley pretty quickly based on her online ratings and patient feedback. 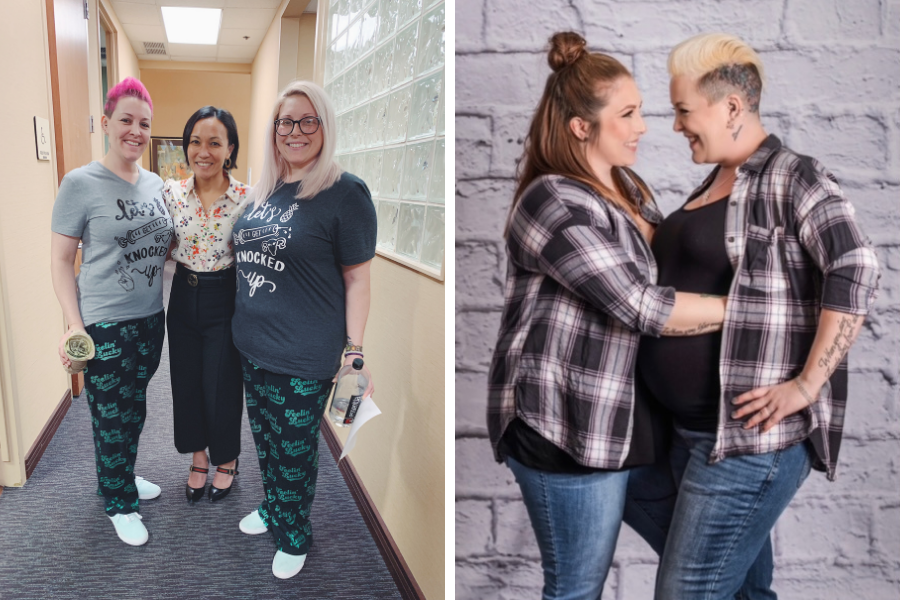 We made an appointment for both of us to be checked out to help us decide who should carry first, and our journey began!

But oh, were we naive in the beginning! We’d assumed that it would be super easy and quick — I mean, we were only missing one little thing!

We also thought we could overlap our pregnancies so the babies could be super close in age. Ha! A chat with the fertility therapist helped us to realize that one pregnancy at a time would be the best course of action and now looking back, we understand why! 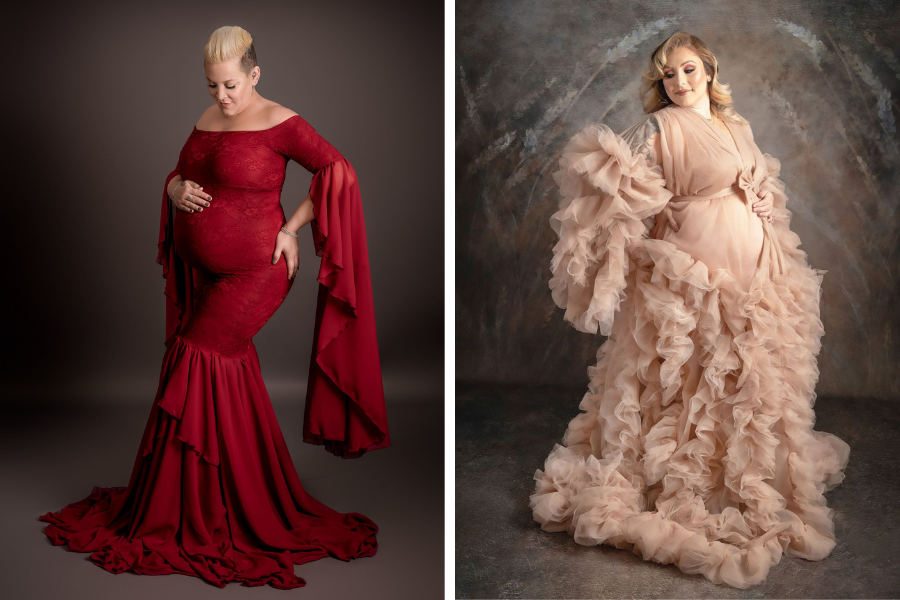 After making our first appointment and running our labs and tests, it was decided that Sirena should go first due to her ovarian reserve and history of endometriosis.

Initially, we tried three rounds of IUI, but they failed to produce a pregnancy. Dr. Nackley assured us that IVF would be a better route for Sirena's fertility issues, so we moved to that.

After a second frozen embryo transfer and our last embabies transferred, Sirena got pregnant with Domino. 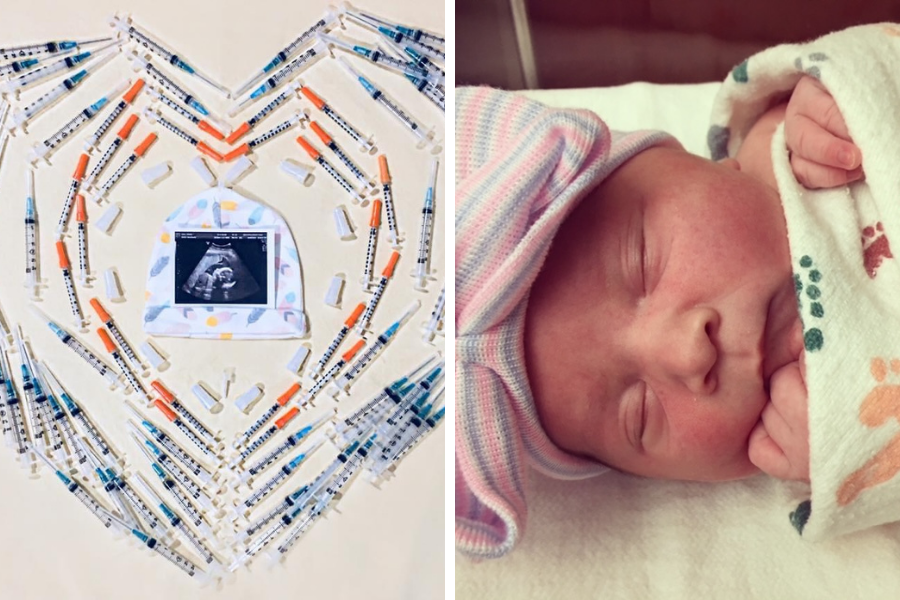 When it was my turn, it went pretty much the same: three rounds of IUI failed to produce a pregnancy. While moving onto the IVF protocol, uterine polyps were found. After healing from that, we began our third IVF journey, resulting in a pregnancy with my first frozen embryo transfer.

Sadly, however, it ended in a miscarriage early on.

We later learned from Dr. Nackley that she was a little girl — precious knowledge we will always hold onto — and that there were no genetic issues. We grieved really hard from the loss, but took some hope from that.

Our miscarriage changed us, but also brought us closer.

Sirena was so unforgettably supportive and kind while we both grieved the loss. She carried our family through that one.

We took a small break as needed for the body to heal, and then we started again.

So many questions surrounded each attempt. Will the transfer work this time? Why does my body not want to cooperate? Will we lose another pregnancy?

We are both pretty goal-oriented, so we didn’t mind the shots, medicine, or procedures, as it was all for the greater good of achieving our family goals. But the worries, the questions, and not knowing for sure how it would go — that was not easy to endure.

Fortunately, on the second frozen embryo transfer, I became pregnant with Finnigan! 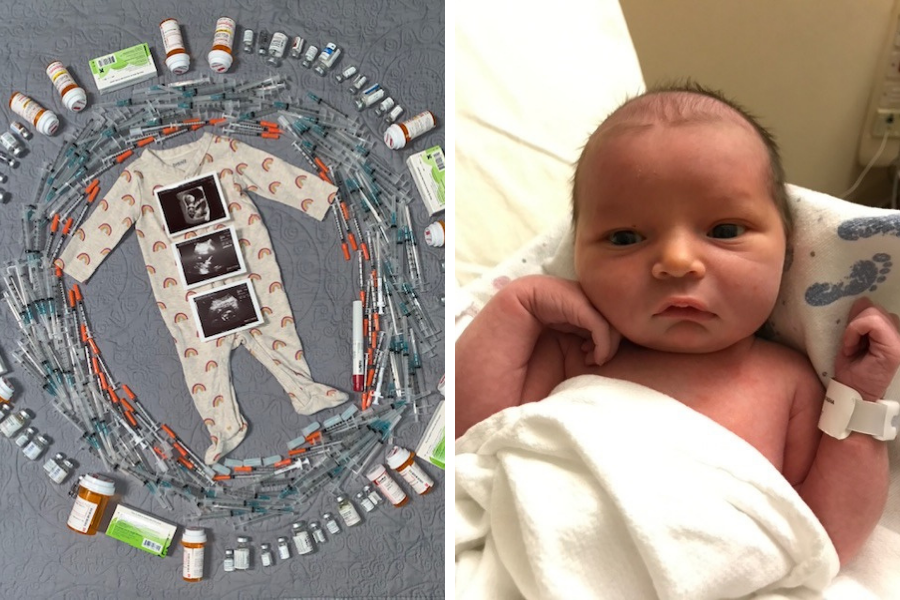 Getting to this point was certainly difficult, but the journey was incredibly rewarding.

To get through it, family and friends were essential. The staff at CARE Fertility were also fantastic — we cannot thank them enough for being a support system on our infertility journey. We shared laughs and tears, and they truly became like family.

We also joined the Braving Infertility support group online, and it helped tremendously to be able to share and identify with other patients on similar infertility issues. 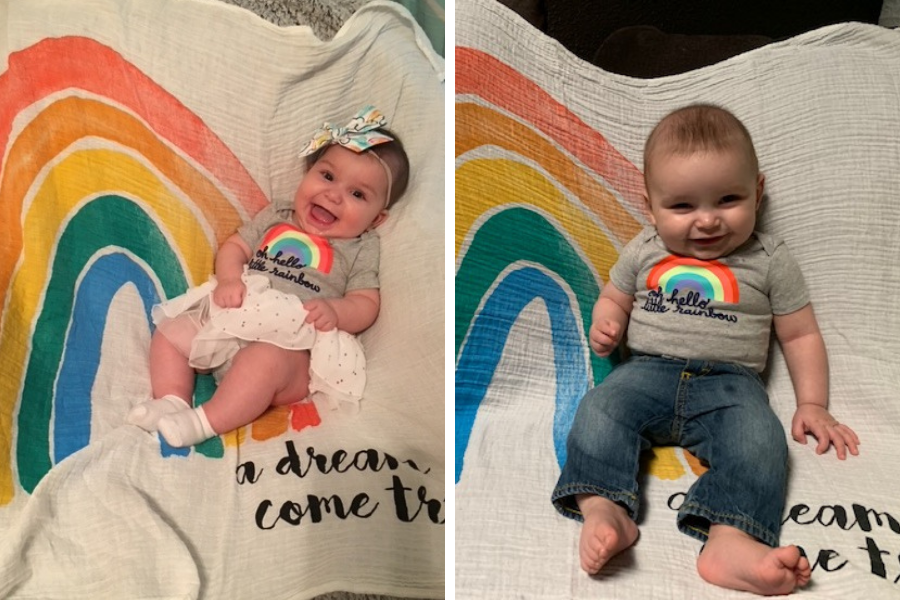 Another little thing that helped was making traditions for each type of visit. Bagel breakfast from the shop around the corner before sonograms. Movie dates at the theater around the corner after transfers. And, of course, shot-o'clock party on the couch every night, laughing uncontrollably about how bad our bums hurt.

This experience definitely changed us! We have a newfound respect for families who suffer infertility issues. However, we are both happy to have started a family later in life. 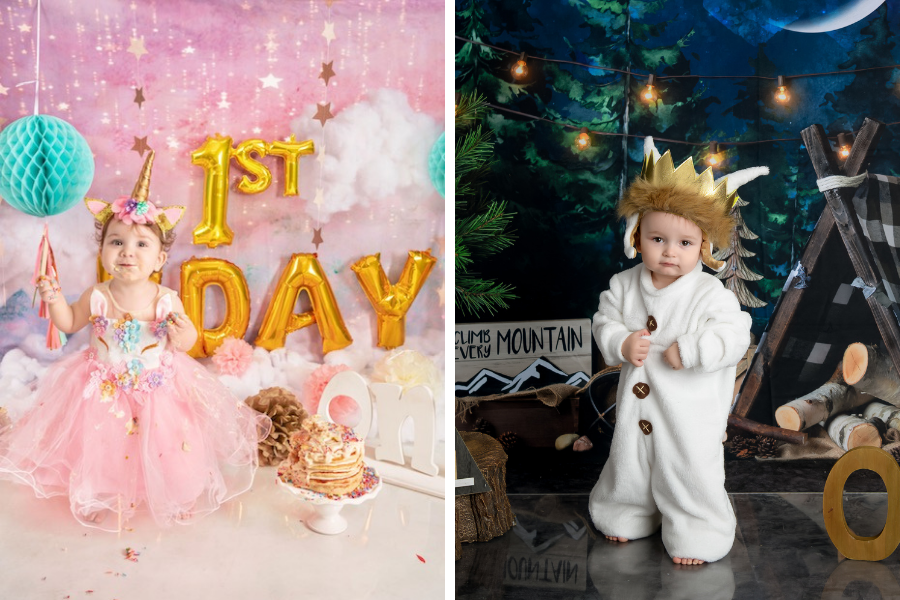 Our journey has shaped our family to what it is today and we wouldn’t change that for the world.

Sirena and I are now the go-to people in our friend group to talk about fertility issues, because we are open and honest with our experiences. We want people to know they are not alone in what they are feeling or going through during the process. 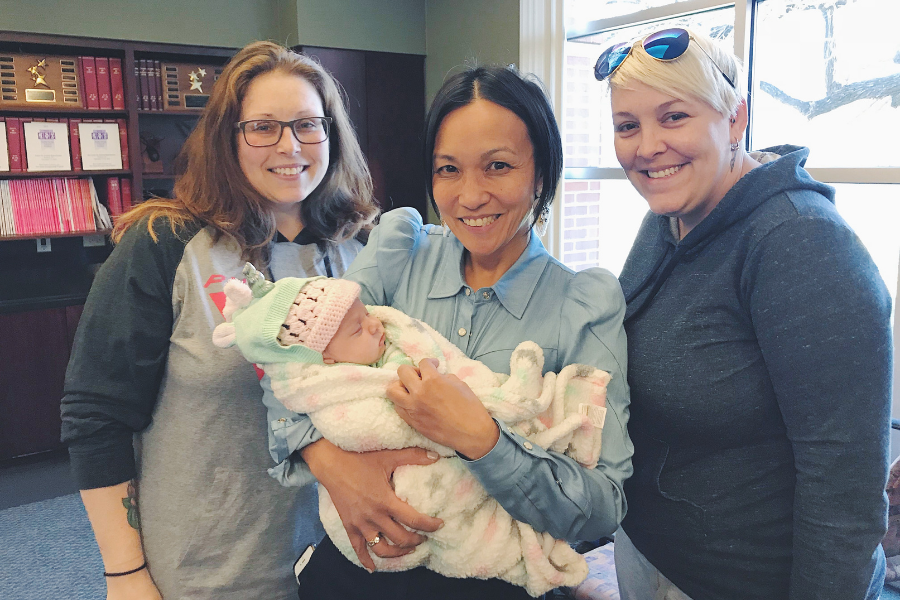 We have also become huge advocates for the privacy of family planning, and we spread the knowledge with those around us.

Don't ask a woman when she is getting pregnant, or giving their child a sibling, etc. It can be triggering in ways that cannot be comprehended by those who aren't the 1 in 8.

Be kind to yourself.

Infertility affects so many couples, including those in the LGBTQ+ community, and it may not be as easy as simply securing the “missing ingredient.”

Be patient with each other and communicate constantly! You may be put on hormone therapy and your body and mind will take time to adjust. It's ok — just talk to each other!

Reach out and talk to other LGBTQ+ couples, too. Ask questions and lean on them for support. Remember that you’re not alone. 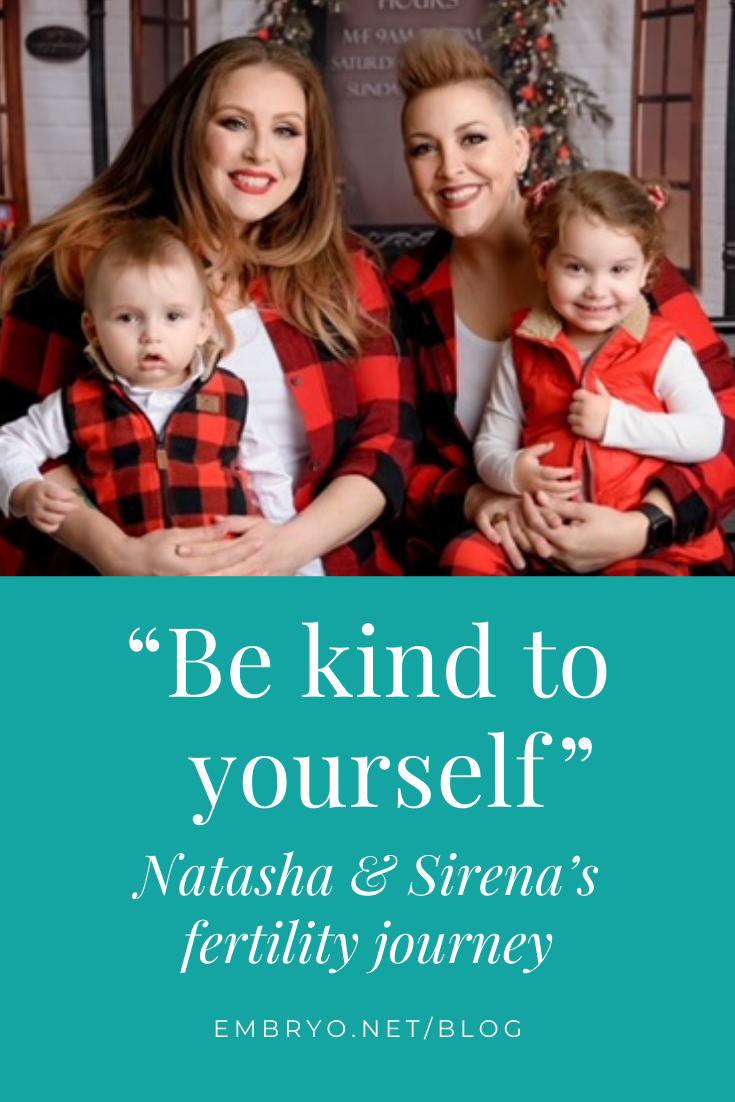